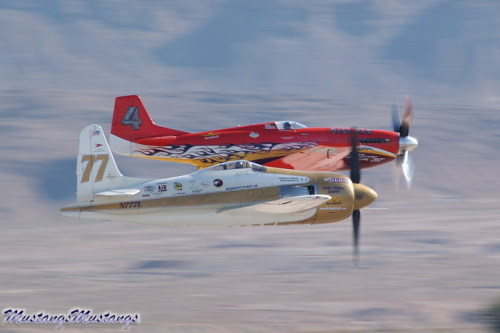 This year, Aviation Nation at Nellis AFB in Las Vegas, NV celebrates the 60th anniversy of D-Day and pays tribute to World War II Veterans. The 2004 show is on November 13th and 14th. Gates are open from 8am - 5pm each day.

They are expecting between 125,000 and 150,000 in attendance for both days. The show finale is the USAF Thunderbirds precision flight team. There are also many other ground and air displays to enjoy.

This is really the last big air show I can think of before the winter warbird hibernation. Lucky for me I live near 5 P-51s and get a shot of them flying around during all months of the year when the weather cooperates. The weather in Las Vegas is forecast for sun and mild temps - sounds great.

Due to a family event on Saturday, I was only able to attend Sunday. After a 1am wake up, on the road at 1:30am, then a 7 hour drive from southern Santa Clara Valley, I finally arrived in northern Las Vegas at Nellis AFB. I know, the 3 hours sleep and 7 hours drive were supposed to be the other way around.

The security at Nellis was thorough and professional as I picked up my pass early Sunday. There were over 100 aircraft to check out including a Sopwith Strutter (WWI vintage) and the latest USAF jet, the F/A-22 Raptor. That once frozen P-38, Glacier Girl, was on display (surrounded by a huge crowd most of the time). P-51s, warbirds, the latest jets displays, some biplane pizza pilot guys, jumpers, twisty-turny aerobatics and the USAF Thunderbirds are all going to put on a great show. Relax, kick back and click away.

Disclaimer: You all know I am a P-51 guy and I go to these shows to see the P-51s. I love to watch the air show also, but I shoot mustangs first and everything else come after that. So if I don't have great coverage of non-P-51s, well sorry, but that's the way it is.