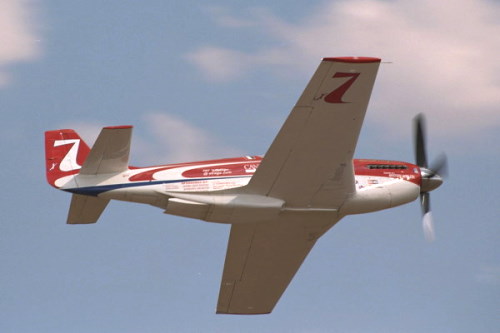 Reno, today's home for the world's fastest motor sport. This year, 1999 will be very entertaining with some of the fastest times ever. Dago Red, #4 P-51 Mustang piloted by Bruce Lockwood is standing by to defending his win last year. The "Tiger", Bill Destafani in #7 Strega will not let that happen without a fight.

John Penney in #77 Rare Bear has waited 5 years since his last win in 1994. The Bear is here but some wonder about its health. Penney surprised many and came out fighting with a 468 mph qualifying speed. Good enough for 3rd. There are also several Sea Furies just waiting for any small opening between the top three. P-51s Voodoo, Miss America, Ridge Runner III, Risky Business, Cloud Dancer and Merlin's Magic are sure to be contenders as well.

Reno offers a top notch air show with a very good static display. Performers like Greg Poe, The USAF Thunderbirds, Northern Lights, Bob Hoover, Wayne Handley and Tim Weber. I remember watching Bob Hoover in the Shrike Commander when I was at Reno in the early 70's. Yea, that's back when we did ride in the back of the station wagon and no, we did not wear any seatbelts.

Wonder if Bob Hoover still uses the ice tea trick ... What used to amaze me (and still does) was when he climbed very high and shut down both sides of the commander, then came ripping down in front of everyone, does a loop, than another on downwind, turns base, then final, lands and rolls right up to the front of the airshow with just the right amount of speed. Simply amazing.

They also have racing, racing and more racing - many classes, but we at MustangsMustangs are mainly interested in the unlimited class where all the P-51s hang out. They dropped the T-28 class this year and added the sport class for homebuilts like the Glasair, Lancair and others. The numbers of T-28s had been in decline. They (RARA) also modified the unlimited race course by shortening it on the northern end to a total of 8.3 miles around.

The pits are a great place to get a close look at what it takes to keep that big horsepower engine running during race week. The crews are very busy checking and re-checking, sometimes fixing broken pieces of airframe and engine. Racing is unforgiving. Come to Reno and check it out. There is nothing like the excitement when the Unlimited Gold aircraft come down the chute and takes that first lap. I can't describe it here, you gotta come and see for yourself.

I have also met a few WWII P-51 Mustang aces at Reno as well. It is always a treat to talk to veterans. They have some very good stories to tell and are willing to answer your questions most every time. I ran into a few in the static display area on the east end of the field. There you will find a super super corsair, a few mustangs, military jets, choppers, Korean vintage jets, and some cold-war stuff too. Take the time to walk behind the grandstands to the east and you can't miss it.

Some of the display aircraft included Jack Hovey and Ted Contri's P-51s (one of Contri's was at Reno) and they are a welcome sight at Reno this year. They were looking good and on display along with 44-63701, N26PW. Sal Rubino Jr. of San Jose is the new owner of 44-63701. This is the first time this newly restored P-51 has been seen by many. Take a good look, it was restored with very close attention to detail.

Bob Odegaard rebuilt Vought F2G-1 sn: BU88457, N5588N and this is a beautiful restoration of one of Cook Cleland's air racers from the late '40s. Very nice (and rare) - this is the only flying F2G. A beautiful B-25 did not fly the course (of course) but was on display and flew out Sunday evening.

The Thunder Mustang is a neat looking sport plane that is designed to look and fly like a P-51. It is 3/4 scale and uses a Falconer V-12 600hp engine, tandem seating composite design. I didn't see it fly this year at Reno. They say you can build one complete for under $300,000. Not too shabby if it performs like they say. The Thunder Mustang is designed and constructed to look like the real P-51. People at Reno that have seen it fly say that it sounds pretty good too. Not like the real thing you know, but pretty good.

As a note: I must appoligize for the poor quality of some images. I paid to have some scanning done because I had hundreds of photos and not enough time, but the work was bad. They did it twice but it was still bad. Many of the slides and negative were scratched in the process. Some have already been rescanned and someday, they will all be rescanned to a much better quality.