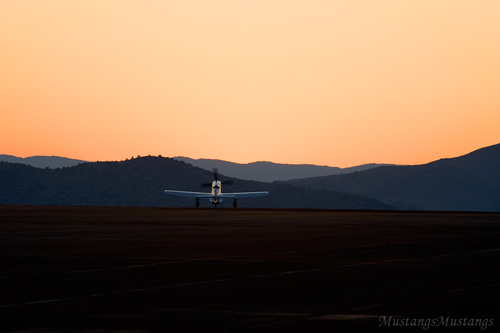 Are you ready? Ready for one of the best years in Reno Air Racing? Ready for P-40s, P-51s, Sea Furies, Corsairs, Bearcats, Tigercats and a few Yaks and maybe a Wildcat to round out the sound? If you get lucky, maybe a FW-190, all flying on the deck with the fastest speeds approaching and possibly breaking the 500 mph barrier. Do not come to Reno unless you are prepared to come back, over and over and over. You will be hooked when you see, hear and feel the power of WWII fighters buzzing the desert floor at nearly 500 mph.

The Formula 1 and Biplane classes are up early for a 6:00 am brief followed by race preparations and races that start around 8:00 am. They are small, but fast and very competitive. Only the top Biplane racer the last few years is not seriously challenged. All other racing is tight and exciting. These racers use the smallest course measuring just over 3.1 miles.

The Sport class is for kit-built aircraft with less than 650 cu in engines like the Glassair, Lancair and Questair aircraft. They are very fast, with speeds reaching around 350 mph. The Super Sport breaks the 350 mph mark and post speeds over 400 mph! Popular Super Sport aircraft are the Thunder Mustang, Nemesis NXT, Lancair Legacy and the Questair Venture.

The WWII training aircraft, the North American T-6 and SNJ comprises the T-6 class. Their course is 5.07 miles long and the racing is always close and very loud. There is only so much you can do to the T-6 aircraft and remain within the rules. The result is very close times and good race action for the fans.

Jets. F-16, F-15? No, sorry but that would be cool. Maybe in time. For now, no after-burning jet or wing sweep over 15 degrees are allowed. What is allowed are jets like the L-39 Albatross, L-29 Delphin, de Havilland Vampire, the Iskra and the Provost. The Jet class posts the fastest speeds ever at the Reno Air Races reaching well over 500 mph.

WWII Fighters, some with heavily modified airframes and engines fly 8 at a time around a 8.43 mile course at 50 - 150 feet above the Nevada desert reaching speeds of 500 mph. What an incredible year at the Reno Air Races with 9 differing types of Unlimited aircraft: Yak, F7f Tigercat, FM-2 Wildcat, P-51 Mustang, Hawker Sea Fury, Folke-Wolfe 190, P-40, F4U Corsair and the F8F Bearcat. Yes, my friend, you are now in warbird heaven.

This year has been hyped as being the fastest field in many years and the return of some racers not seen for a while. Rod Lewis purchased Mike Brown's Champion Seafury #232 but it has not raced since Brown retired. 232 was here and posted a very fast qualifying time of 469, but burnt a piston in the process - they are out! Chuck Greenhill now owns the Super Seafury "Furias" and Furias is looking mean and at Reno. Also returning is Race #39 "Precious Metal" now owned by Thom Thorn.

Who is fastest? Strega returned as the fastest Unlimited Racer. Voodoo is here pounding on the door. Jimmy Leeward is returning with the Galloping Ghost. The Ghost has some work to do but Leeward is confident he will compete for the top spots. The most wins at Reno for a Bearcat is of course #77 Rare Bear. The Bear is here healthy and ready to put the roundies on top again.

Missing? The fastest racer ever at Reno - Dago Red #4. Dago is now under new ownership with rumors of returning to racing in the near future. Let's hope so, fingers are crossed.

If you get bored of air racing (uh ... nevermind) stick around and watch some top airshow talent between the races. The USAF Thunderbirds flew on Wednesday and Thursday, then the black L-39s of the "Patriots" put on a good show for us on Friday. Eddie Andreini was at the Races flying a spectacular routine in his super Stearman. When time permits head East of the main grandstands to visit the display of antique aircraft. Stay there and watch a few races, it is a good spot. When you are done there, walk West past the grandstand and into the pits. There you will find all manner of power - 28 cylinder radials to 12 cylinder V-12 Merlins - both can pull a WWII fighter around an 8+ mile course at near 500 mph.

Reno has it all! Air racing, air show acts, an awesome display of antique aircraft, plenty of good food and almost always sunshine days. It is a week that goes by too fast. RARA should should make it a month long event :) - that is a great idea. I am putting in for PTO at work right now. I will tell my boss I will be gone each and every September. He will ask which days, to that I will respond ... all of them!

The weather this year was very pleasant during the day but with some late afternoon thunderstorms and light to moderate afternoon winds. A sweatshirt in the morning and tee shirts after 9am or so is all you needed - nearly perfect.

The Reno Air Race Association (RARA) handles the show extremely well for everyone. They have to keep the fans, the race pilots, the performers, the vendors, the support staff, the FAA, the local officials and most importantly us media types happy for an entire week! That is no easy job. I can say that as a media rep, the Air Race Media Operations Staff is fantastic. They do everything they can to help you get what you came for. They are mostly volunteers and work long days and are always willing to help. No other show that I have been to handles the media so well. Thank You!

Also a huge thanks to Nikon USA. Nikon comes to the media center and lets us try out their equipment. I use Nikon anyways so I can check out the latest and best pro gear from Nikon.

Remember, this is the Fastest Motorsport in the world.

This year the races were cut short by two days. They were canceled Friday evening after the crash of Jimmy Leeward. Be sure visit all pages and remember those lost that day.